Participation at the event is free of charge, but registration is compulsory.

Tuesdays and Thursdays, from 16h to 18h. 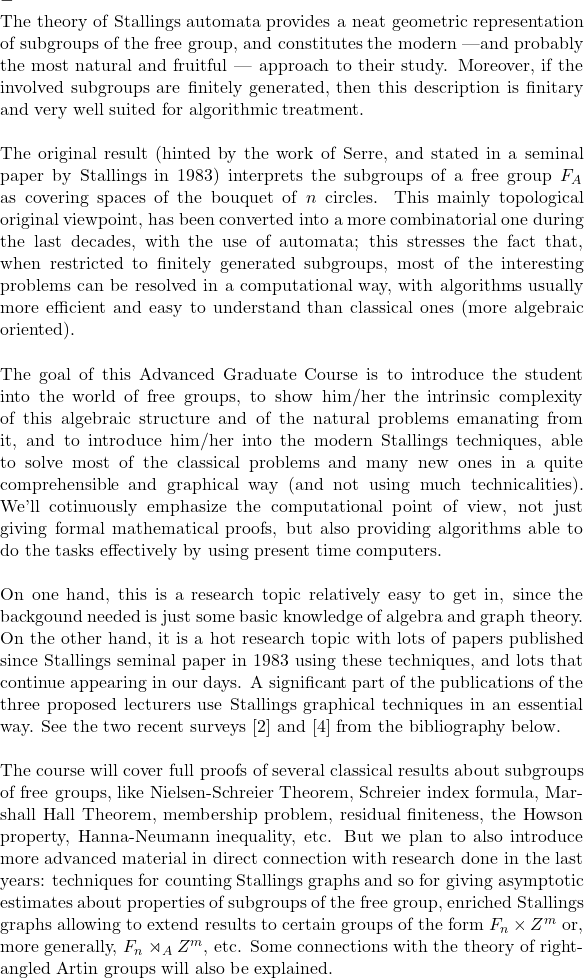 17/1/23 (2h): Introduction: Free groups. We will introduce free groups (from several points of view, algebraic, combinatorial, and categoric) and its first algebraic properties. We will present some natural questions and examples motivating the course.

19/1/23 (2h): Automata and languages. We will set up the connection between automata (i.e., graphs with certain decorations), languages, and (subgroups of) the free group. This includes several relevant (graph-theoretical) definitions together with the proof of a few technical lemmas crucial to establish this connection.

24/1/23 (2h): The Stallings bijection. This session is devoted to the central result in Stallings theory: there is a bijection between a certain kind of automata and the lattice of subgroups of the free group. We will stress the computability of this map when restricted to finitely generated subgroups (corresponding to finite graphs). As a corollary, we obtain the Nielsen-Schreier and the computabity of bases, among other results.

26/1/23 (2h): First applications. In this session we will consider the first natural applications of the Stallings bijection: the membership problem (including explicit rewriting in terms of the given generators) and the conjugacy problem for subgroups. We will stress some similarities and some (big) differences between the behaviour of the lattice of subgroups of the free group, the lattice of subspaces of a vector space.

31/1/23 (2h): Index and Marshall Hall Theorem. We will explain the relation between vertices of the automata and cosets of the subgroup. We will obtain a graphical characterization for finite index subgroups, and the Schreier index formula relating index and rank. As a corollary we obtain also a proof of Marshall Hall Theorem, and the residual finiteness of free groups.

9/2/23 (2h): Counting automata and counting subgroups. We’ll introduce a recent technique developed to count (or asymptotically estimate) the amount of subgroups satisfying certain properties. This is done by counting automata, which can be seen via partial injections (they form an inverse monoid generalizing the classical symmetric group in an interesting way).

14/2/23 (1h): Sage. A brief introduction to the Stallings_graphs package for SageMath, a nice piece of software meant to experiment with finitely generated subgroups of (finite rank) free groups.

14/2/23 (1h): Enriched Stallings automata I. We will introduce and briefly describe a recent extension of Stallings automata: by decorating the automata with integral vectors in an appropriate way, we obtain a bijection (similar to the Stallings one) between a certain kind of enriched automata and the lattice of subgroups of $F_n \times Z^m$, the direct product of a free and a free abelian group. Of course, the algebraic questions related to the free abelian part usually become systems of equations, but the interplay between the two parts is interesting and sometimes highly non-trivial.

16/2/23 (2h): Enriched Stallings automata II: Despite the apparent similarity, the lattices of subgroups of $F_n$ and $F_n \times Z^m$ behave very differently, especially when we consider intersections. A big difference is that the second one does not satisfy the Howson property: it admits pairs of finitely generated subgroups whose intersection is not fnitely generated. By looking carefully at the pull-back of (enriched) Stallings automata, we’ll explain how to decide when the corresponding intersection is finitely generated and, if so, how to compute a set of generators for it.